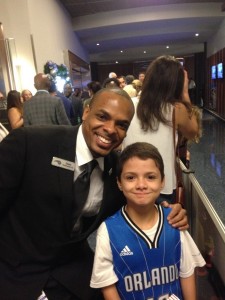 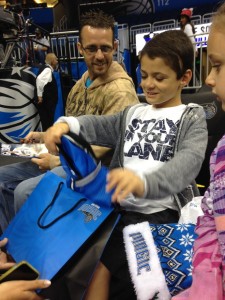 On December 20, New Hope for Kids’ Wish child, Sean was honored as the “Magic Maker” and received his own Magic jersey to wear as he and his family sat courtside. His mom, Josy shared her impressions of the evening:

“Omgosh!!! What an amazing night! He/we were sooo spoiled!! He did meet several players, got an awesome jersey, wonder court side seats, amazing food and the escorts (Devon and Gene) are AMAZING people!!! I couldn’t be more thankful to all of you for this opportunity!!”

New Hope for Kids appreciates the generosity and support given to Sean. He is an amazing child, who at only 9 years old, has already had more than 14 surgeries due to a rare illness called arthrogryposis multiplex congenita, a disorder that causes joint deformities and restricts movement in the hands and feet. This results in crooked or hooked fingers and toes, overlapping fingers, varying among those affected. Without repeated surgeries as he grows, Sean would be unable to walk or use his arms and hands. He is a very determined young man who refuses help with daily functions. He finds the courage and a way to overcome his disabilities. In fact, he does not want to be considered disabled at all. His top two interests are sports and video games. Sean was accompanied by his parents, Ryan and Josy Cross and his 8 year old sister Breanna. This was definitely a magical night for Sean and his family. Thank you!!