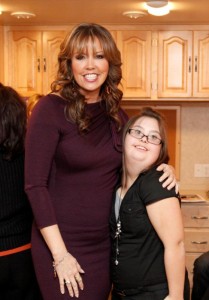 West Wing Limousine drove up to Sydney’s home November 21. She was about to receive the surprise of her life. For months, New Hope for Kids had tried to make Sydney’s wish come true to meet the cast and be in the audience of “So You Think You Can Dance.” Thanks to volunteer Michele Chamberland, Mary Murphy and her assistant, this dream was about to unfold. The limo swept Sydney and her family off to OIA where they caught their flight to Hollywood, California!

Sydney is 14 years old and is an avid fad of the dance show. She has Down syndrome and has been through many trials due to vascular problems including a stroke when she was only 7 years old. Her resiliency is admirable and her enthusiasm is catching. So much so that after the show, Mary Murphy accompanied Sydney and her family out to dinner. Mary took time to get to know Sydney and introduce her to the entire cast. You can see the pure delight in Sydney’s eyes as she posed for a picture with Mary.