This Years Drawing of Chance Winner
for a New BMW 325i.

New Hope for Kids completed one of its biggest fundraising events of the year on April 7th: “Art of the Vine”. At the event a 2006 BMW 325i drawing of chance took place. Tickets cost $100 or 2 for $150. This year 1364 tickets were purchased and generated $105,000. There should be sufficient funds to grant 13 wishes to children with a life threatening illness and 15 families will receive grief support for an entire year. 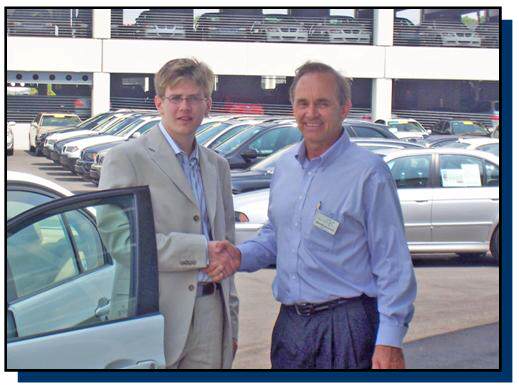 This year’s winner, Evan Weybright came to a Chamber of Commerce function hosted by New Hope for Kids. He was unfamiliar with New Hope for Kids, but after learning of its mission, decided to get 10 drawing of chance tickets. While living in Indiana a few years ago he was in a serious relationship with a young woman, whose brother was tragically killed. Almost immediately the relationship with the young lady started to unravel and her entire family structure became fragmented. The relationship eventually dissolved. Evan went on to point out there was no organization in the Ft Wayne area similar to New Hope for Kids. Had there been, things may have turned out differently for his friends family. Evan wanted to support a program he now knew would help families struggling with grief issues similar to what he had witnessed in Indiana. So he decided to participate in the drawing without really believing he would win. On April 7th one of his tickets was drawn.

There is an anecdotal ending to the story. Evan was unable to attend the drawing at “Art of the Vine” so he sent a friend. On Saturday, Evan spoke with his friend Ed and asked him who won the car. Ed said some guy, he did not know whom, but they tried to contact the winner by phone up on the stage after the drawing and left a voice message for the guy. Well, on Sunday, Evan was reviewing voice messages on his cell phone when he heard he was the person who won the car. When I spoke with him on the following Monday he said he was still in shock and had never won anything in his life. In Evan’s case a $750 donation turned into a $35,000 payback.