And the winner is …. Mr. Charles Thompson! 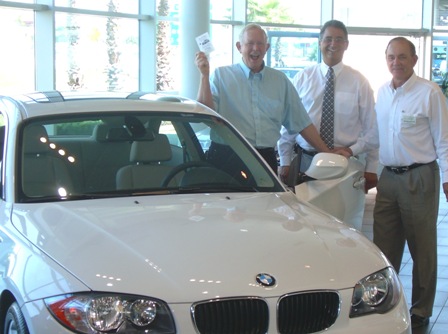 When asked what his first thought was on learning he had purchased the winning ticket in our 2010 BMW Drawing of Chance, Mr. Charles Thompson relied, “I was a little dumbfounded!” Mr. Thompson, who worked for the City of Orlando until his retirement, had never won anything before in his life!

“I started buying the tickets four years ago. While shopping the Maitland garage sales with a friend, I often passed by the New Hope for Kids Center for Grieving Children and saw the BMW parked in front of the charity. At first I just considered it another donation, but I began to learn more about the work New Hope did when I read your newsletters.”

Every year the drawing for the BMW is held at the Art of the Vine fundraising event. At 10:00 p.m. on Friday, April 16, hundreds of excited guests gathered around the stage at Fields BMW in Winter Park as the ticket barrel was spun one last time. When it came to a stop, John Mantione, Fields BMW general manager, reached deep into the barrel, pulled out one ticket stub and called out the name. “The winner is Charles Thompson!”

Emotions ran high as the crowd looked around to see if the winner was present, but Mr. Thompson was not present at the event that evening, so John called from the stage to inform him of his good luck.

Mr. Thompson had just gone to bed when the phone rang and woke him up. At first he didn’t understand what the unidentified caller was talking about. “I could hear the sounds of voices and laughter in the background and at first I had the impression the caller was asking me to make a donation. When I realized that he was telling me I’d won the car, I considered the possibility that one of my friends was playing a practical joke on me.”

Next morning, still somewhat doubtful, he went online to check that he was the actual winner and was thrilled to find out it was true!

Mr. Thompson doubts that lightning will strike twice, but plans to keep buying tickets to support New Hope for Kids, and perhaps, if he is very lucky, win another new BMW.

This is the 20th year that Fields BMW has donated a new car to be used in our annual drawing of chance. Since 1990, this critically important support from Fields BMW has enabled us to raise roughly 2 million dollars to support our children’s programs. Our very humble thanks to Fields BMW and to everyone who has supported us by purchasing a ticket over the last 20 years!