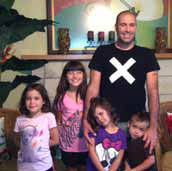 The Bernard family consists of father, James, and his children, Ava, Chloe, Mia, and Asher. They are an energetic, talented family that attends New Hope for Kids Center for Grieving Children. James’ wife and mother of their four children died in 2011 after a long battle with leukemia. After his wife’s death, James had concerns about some of the ways his children were experiencing grief: acting out, feeling depressed and expressing rage. Since they began attending the Center for Grieving Children, James has seen many positive changes in his kids, who are now ages 4-10. They love the grief support groups and James knows that the sessions have had a huge impact on their lives. Ava has even expressed interest in becoming a grief facilitator in the future to help others dealing with grief. New Hope for Kids has also benefitted James as a parent. As he does not attend counseling, participating in sessions at the Center for Grieving Children is his only chance to talk to other parents and caregivers who are facing very similar challenges. James’ advice to new families contemplating whether or not they should contact New Hope for Kids: “Just do it. It is an inviting, non-judgmental environment that ends up feeling like home.” The Bernard family has made connections with other local families who are dealing with grief. James feels that this is an added benefit to the services New Hope for Kids already offers. He thinks the group and community atmosphere at New Hope for Kids is particularly effective for him and his children because they enjoy being around people. Overall, James and his family cherish their time at New Hope for Kids and they cannot imagine where they would be without it.